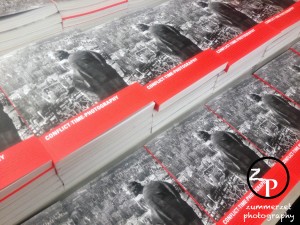 Don McCullin perhaps the most well known conflict photographer of the 20th Century was featured more than once, a poignant print of Don’s was right at the end entitled The Battlefields of the Somme, France 2000. It summed up the mood after all the fighting; what was it for – a field? There we have it, captured in time, a peaceful French field as if Don’s own way of signing off the exhibition was PEACE. 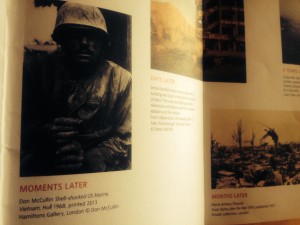 Kurt Vonnegut was featured at the start. Kurt was in Dresden in WW2 and from the horrific experience of war he finished every text and essay with the word: ‘peace’. 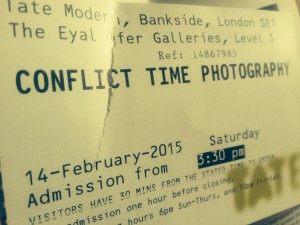 For what might have been forgotten, the collection brings together some of the true horrors of war, especially the Atomic bomb. Matsumoto Eiihi ‘Shadow of a soldier remaining on the wooden wall of the Nagasaki military headquarters’ 1945 is among them. Indeed it is a negative in itself, the brightness of the explosion has burnt the guard’s shadow onto the wood, both capturing a moment in time for future passers-by to comment on the truly unbelievable image.

The image on the front cover of the leaflet for the exhibition is by Shomei Tomatsu depicting the Japanese’s helmet abandoned on the broken floor. Another telling image is the watch, smashed, broken and stopped at 11.02 – the time the atomic bomb went off, when time stood still. 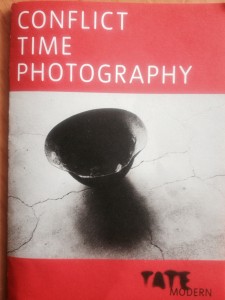 It’s not all in the past; each room is takes you in time further from the event, from moments later to a century on at the end. A beautiful, haunting photograph by Luc Delahaye at the beginning of the exhibition from the Iraq war captured just after the US had bombed had a great impact; the dust falling, grey, chaos, a crumpled tank, rubble everywhere – it was like the taste of explosives was still in the air, indeed a recent event of the wars still continuing.

A thought-provoking set of images by Simon Norfolk was worth a careful observation; the layers of war visible and a relatively recent Victory arch left to decay with the rubble surrounding it.

I would strongly advise a visit to the Tate before the exhibition finishes. For more information check the Tate website. http://www.tate.org.uk/whats-on/tate-modern/exhibition/conflict-time-photography

Your friendly photographer – Capture the moment